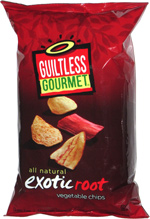 Taste test: This bag included chips from four different kinds of vegetables, and I opened the bag to find that other than one kind being quite red, it was hard to tell the other ones apart.

Also, most of the chips were broken into small or even tiny pieces. We've enjoyed eating Terra Chips, and those were much easier to tell apart, with much less of a broken-chip problem. I'm pretty sure I was able to identify the the yuca chips, as they were cut thin and had fairly smooth, flat surfaces with a color similar to potato chips. As is typical of yuca, they had a much snappier crunch than potato chips. Their flavor was fairly mild. The taro chips surprised us by not having the usual look of taro, which can best be described as looking like whole bunch of ink stains from a purplish ball point pen. The texture was similar to the yucca chips, but with maybe a thicker cut. The sweet potato chips didn't have the bold orange color typical of sweet potato chips, with instead a lighter orange, but a softer feel than the others. Overall, our snackers did like eating these, praising the mix of vegetable tastes, textures and mild saltiness, but Terra Chips really does a better job of delivering a variety of vegetable chips in a nicely presentable way that they can easily be savored.

From the package: “Product of Brazil” ... “A feast for the eyes and the soul. When we say exotic, we mean it. Our new Exotic Root Chips give you a colorful mix and savory blend of the oh so delicately sliced root vegetables. Using an age old recipe, the traditional favorites include Yuca, Sweet Potato, Taro & Batata root vegetables.”

Company: The B. Manischewitz Company, LLC

This snack was contributed to Taquitos.net by the manufacturer. Review published March 2013.