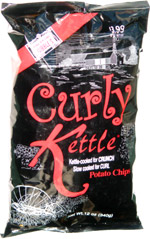 Taste test: These potato chips were pale yellow in color, with some brown areas on some of the chips.

They were cut fairly thin, and most of the chips were on the small side. They were indeed curly as the name said, with most of the chips folded over and a handful stuck together in groups of 2 or 3 chips. The crispness of the chips was excellent, as the cooking process gave them a crunch and crispness different from most potato chips but typical of chips fried in lard. They were tasty as well, with a good potato taste mixed in with some extra flavor from the lard. Some of the lard-based chips have an unpleasant afteratste, but we didn't notice any such problem with these.

From the package: “Kettle-cooked for crunch” ... “Slow clooked for curl” ... “Using the finest potatoes, we cook them slowly in pure lard – the old-fashioned way – to capture the rich potato flavor. Then we lightly salt them, package them while they are still warm, and ship them out.”