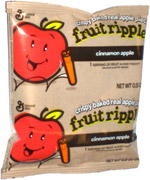 Taste test: These apple chips were cut with a ripple cut but broken up into tiny pieces, with some apple skin visible on the edges most of the pieces.

The taste was a lot like apple pie, fairly intense as apple snacks go, on the sweet side but not outrageously sweet. I couldn't taste much of anything in terms of cinnamon. On some of the pieces, I could even see the cinnamon, but I still could hardly taste it. The taste was decent, but the tiny pieces were kind of annoying. Still, the whole snack seemed quite pointless. Fruit Ripples were promoted by General Mills as "1 serving of fruit in every pouch!" If I were looking for one serving of fruit of the apple variety, it would be a lot easier to just eat an apple than to have to deal with this.

From the package: “crispy baked real apple pieces” ... “1 serving of fruit in every pouch!” .. “New Fruit Ripples are made from just a few wholesome ingredients that taste delicious!” ... “Ingredients: Dried Apples. Contains 2% or less of: Apple Juice Concentrate, Cinnamon, Sodium Sulfite (as a preservative).”

This snack was discovered by Justin May. Review published .