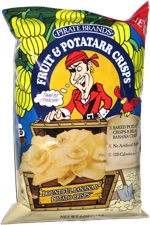 Taste test: This bag promised the unusual combination of potato crisps (like Baked Lay's) and banana chips. We opened the bag to find that just about everything visible from the top looked like Baked Lay's. So I grabbed one of those and ate it, and was quite surprised by the taste. It was nothing at all like Baked Lay's — maybe the texture of those, but with a sweet, banana-like taste. Weird. I shook the bag up a find some banana chips, and did find some, as they looked quite different from the potato crisps. I'm not a big fan of banana chips in general (I'd much rather eat a ripe banana) and the same held true for these — OK but just not a great banana taste, plus a gritty texture.

My initial expectations were for a mix of sweet (banana chips) and salty (potato crisps) but neither proved to be noticeably salty. Since I didn't like either one, the combination didn't work either. Weird, and not one I'd buy again. Pretty bad.

This snack was discovered by Jeremy at Market Basket. Review published July 2016.