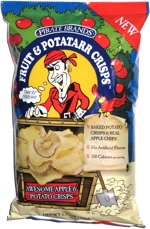 Taste test: This bag combined potato crisps (like Baked Lay's) and apple chips, and it was immediately simple to tell them apart, as the apple chips had a very dark red skin all the way around.

I grabbed a potato crisp first, and immediately upon biting in, I was surprised by how different it was from other potato crisps — and how terrible it was. It seemed like maybe the apple taste had rubbed off onto the potato ones, and that apple-flavored potato crisp was not good at all. (A similar thing happened with the potato crisps in the potato and banana version, though this one tasted even worse.)

I tried an apple chip, and it was far better — it tasted like a fairly typical apple chip, pretty good. But the combination of one bad thing with one good one makes for a bad mixture, especially since most of the bag was the potato ones. Yuk.

Smell test: Kind of apple-like. More like apple pie than other apple things.