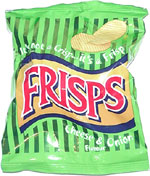 At first glance, they looked like regular potato chips with medium-wide ripples. But looks can deceive, and the "It's not a crisp" slogan on the front of the bag tipped me off that there might be more to these than met the eye.

In actuality, the Frisps were more like Pringles than regular potato chips — made from dried potatoes and molded into shape, rather than being actually cut from potatoes. Unlike Pringles, Frisps weren't uniformly shaped, and they were also thicker than Pringles. They also had a resemblance to Pringles in terms of the kind of potato taste. A great snack, and I hope they come in bigger bags!

From the package: “It's not a Crisp ... it's a Frisp” ... “Cheese & Onion Flavour Reformed Potato Snack” ... “If these FRISPS do not reach you in first class condition please send the pack, to our Customer Services Department at the address on this pack, stating when and where you purchased it and we will be pleased to reimburse you, or replace the product for you. You statutory rights are not affected.”

This snack was discovered by Judy and Lee in Ireland. Review published October 2002.