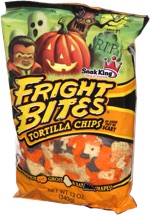 Taste test: This bag contained three kinds of tortilla chips, each with its own shape/color combination for Halloween. The orange (actually red) ones were shaped like the squarest jack-o-lanterns I've ever seen; the white ones were kind of like ghosts, including two holes for the eyes; and the black ones we're sort of bat-shaped. (Many of the chips were broken, and I managed to eat all of the intact bats before I looked to find some to take the pictures above.) Oddly, some of the ghosts were half-white and half-red. So it seemed like the white and red ones were made out of the same sheet of dough, with some coloring on one end, while the black ones were a separate high from blue corn.

All of the chips had a soft crunch, middling and a good mix of corn and salt. Average tortilla chips.

From the package: “Pumpkin ghost & back shapes” ... “So good they're scary” ... “Greetings Boys and Ghouls, kick-up your party with the stylish and awesome taste of Fright Bites.® Shaped and colored in the form of your favorite Halloween characters, this delicious snack will stir-up your holiday spirits.”

This snack was discovered by Jeremy at Christmas Tree Shops. Review published October 2015.