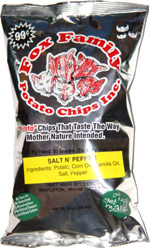 Taste test: These potato chips were generally small and fairly dark in color, with a somewhat wiggly shape.

It took just one bite to realize that they were extremely good chips. They had a texture and taste similar to Russet potato chips, with a dry feel, excellent crispness and a great potato taste. The only thing missing was the promised pepper, because nobody could taste any. A close look at the chips showed some some dark spots that looked like they might be black pepper, but even after seeing that, we could hardly taste any. The pepper issue didn't really matter too much, because they were some of the best potato chips we've ever had.