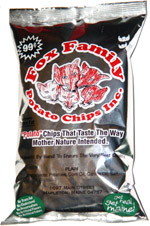 Taste test: These potato chips were a bit dark, wiggly, smallish, crisp and extremely tasty, with a huge amount of great potato flavor and not a whole lot of salt.

They reminded me of Russet potato chips in a way, with a dry feeling and really nice crispness. For strictly enjoying the taste of the potato, these were quite delicious. We also tried the Salt and Pepper flavor from Fox Family, and though that kind seemed to lack any pepper, it did have a bit more salt than this kind. Which one to get might depend on your salt preferences, but both were top-notch potato chips.