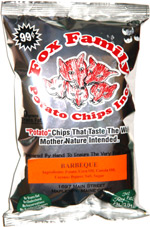 Taste test: This version of the Fox Family Potato Chips had the same great texture as the salt and pepper flavor but a much different and more intense flavoring.

It was not a traditional barbecue chips flavoring at all, but rather just a hot sauce (specifically, cayenne pepper) flavor. The heat was fairly strong in the aftertaste. The underlying chips had a russet chips type of feel to them, very crisp with a nice crunch and nice potato taste. I don't think the hot sauce did much to enhance the flavor of the underlying chips, which really stood out on its own in those (nearly pepper-free) salt and pepper ones. Still, our tasters liked these too and ate their way through the bag very quickly.