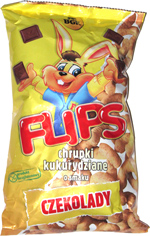 Taste test: This version of Flips from Poland was similar to the various Flips puffs featuring a peanut butter flavor, but with chocolate instead of PB. The puffs were thick and curvy, and the chocolate seasoning on the otherwise light yellow surfaces looked a bit clumpy, an appearance pretty much the same as the peanut butter versions.

We crunched in to find a somewhat stale texture, with a nice mild chocolate taste that mixed well with the underlying corn puff. A crisper texture would have been nice, but the flavor was quite good. We shared these with a large panel of snackers, and although some people noticed the lack of crispness, people were so busy complimenting the taste that there were few complaints about the texture. Just as important, the bag featured a rabbit mascot juggling sections of a chocolate bar.