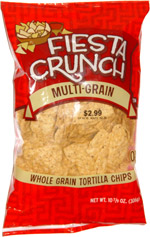 Taste test: These tortilla chips had an unusual shape, as they were kind of like pizza wedges, except that the pointy part of the pizza wedge was not pointy, but instead heavily rounded.

They were very tasty, with mostly the same salty corn flavor that you would expect from a white corn tortilla chip, along with a little something extra, probably from the Whole Grain Buckwheat, Whole Grain Wheat and Wheat Flour that were included among the ingredients. The ingredients also listed Sugar (near the end, but before Salt), which was unusual for tortilla chips, but they didn't really taste sugary at all.

Smell test: Strong corn smell, mostly like white corn tortilla chips, but with maybe a hint of the wheat too.

From the package: “Fiesta Crunch™ proves that you don't have to spend a fortune to get the very best. All the flavor you want at a price that fits any budget. Your family and friends will know you care when you bring home Fiesta Crunch™.”

This snack was contributed to Taquitos.net by the manufacturer. Review published August 2010.