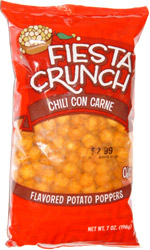 Taste test: These snacks were spherical and coated with a tasty, taco-like seasoning.

Some tasters saw the "chili con carne" flavor and assumed they would be very hot, but they had a nice taco-like taste with barely any heat. There was a mildly hot aftertaste after eating a whole handful of then. Our tasters all liked them. The "Potato Poppers" label was kind of odd as, they had the same texture as most cheese balls — which are typically made from corn &mash and indeed the ingredients listed corn meal first (though potato flakes were also listed).

This snack was contributed to Taquitos.net by the manufacturer. Review published July 2010.