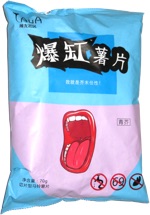 Taste test: These potato chips looked like fairly ordinary ones, with a light yellow color, gentle curves and no obvious seasoning — and certainly nothing wasabi green. But we trusted that they were going to deliver some wasabi (and the fact that the Super Spicy flavor of Explosive Potato Chips was just as described gave the claims some major credibility).

We crunched in to find a light crunch and a nice wasabi zing that tasted quite good and mixed well with the potato. We checked the Ingredients and found nothing resembling actual wasabi or even horseradish, but based on the flavor, you could've fooled us. Very good!