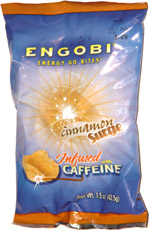 Taste test: These caffeinated snacks had the texture and shape of pork rinds, though smaller, with generally a beige color, but also some darker spots from the cinnamon. 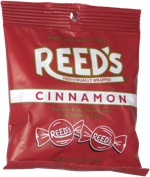 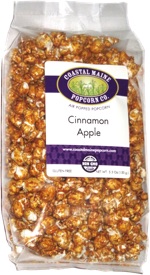 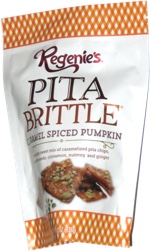 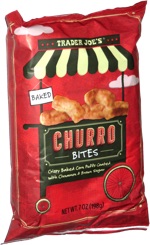 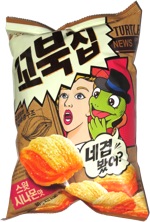 The primary ingredient was wheat, not pork, and the primary selling point was the caffeine. Upon biting in, the main flavor was like cinnamon toast. Our tasters were split on the taste: some liked it, some hated it. (Some of the haters liked the Lemon Lift flavor, though.) A few of our caffeine addicts tried eating a whole bag, and they confirmed that there was indeed some in there, and it gave them a pretty good buzz. The ones who did eat the whole bag came back to the chip bowl to ask where they could buy more.

From the package: “Have you tried this stuff yet? Prepare to get wired. I mean really wired. The brainiacs that invented Engobi jacked it up with some serious caffeine. I don't know how they did it, but they spiked this stuff with more ceffaine than those energy drinks. Oh, and it tastes good!”