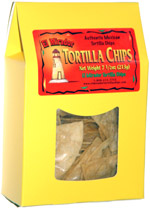 The triangular chips were very thick and very crunchy, with more than enough strength to ensure that they would not break while being dipped in any kind of of salsa or dip. Most of the pieces were flat without much curl, so it was hard to scoop up a whole lot of salsa. They had a mild taste, not that impressive on its own, but fine for dipping purposes.

From the package: “Legend has it that the revolutionary Zapata was sitting around a compfire one night with his troops. They were very hungry, but they all had to eat some tortilla given to them by a peasant woman. Juan Moore, the cook for the hardy band of revolutionaries, was heating some cholesterol free corn oil. He accidentally dropped a tortilla in the oil, and 'voila' (Juan was part French) the Juan Moore Tortilla Chip was born. It was eventually shortened to tortilla chip but. though devoted fans will still ask for just 'Juan Moore Chip'.”

This snack was contributed to Taquitos.net by the manufacturer. Review published May 2007.