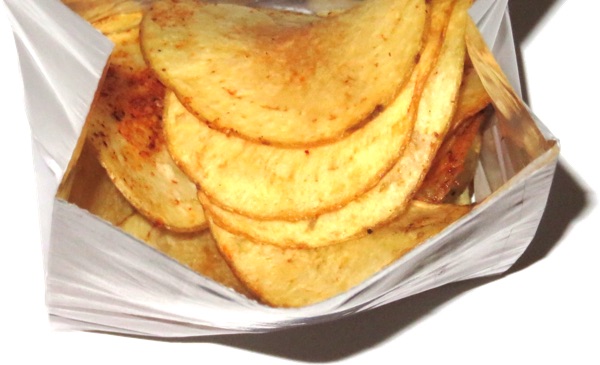 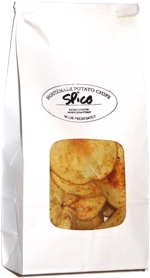 Taste test: This small bag of store-made potato chips contained quite a few chips, and impressively, every single one of them was unbroken — and quite a few were not just large but huge! The chips had a nice yellow color with various levels of browning in places, plus a heavy smattering of some dark red stuff on some chips (but it was absent on most of them). The bag just said "Spice" but the display in the store defined it as Nduja, a pork-based spicy spread.

I crunched in to find a very nice texture, crisp and generally brittle, but it did vary in some of the chips, as some were thicker than others, and there was even a chewy spot on one. The chips without the red stuff also lacked the spice, but they were excellent as plain potato chips go, with a great potato flavor to go along with the very fresh texture. The spiced ones were moderately hot and quite tasty. I ended up eating the whole bag in one sitting, and even with the mix of hot and not-hot chips, there was a nice hot aftertaste. Great chips!

Smell test: Mostly like potato, but some mild pepper smell too.

From the package: “Made fresh daily” ... “Hand-cut and fried in-house”

This snack was discovered by Jeremy at Eataly Boston. Review published December 2016.