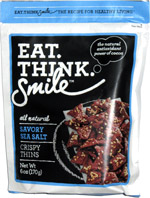 Taste test: These puffs had the same texture and types of shapes as the Sweet Cinnamon flavor, but the reactions from our snackers were quite different.

The puffs looked kind of like small pieces of Shredded Wheat, except shaped like trapezoids, covered in a thin layer of slightly sweetened chocolate, with some sesame seeds stuck to the chocolate. While people really warmed up to the taste of the Sweet Cinnamon version, they just didn't like this one, as there were many thumbs-downs given.

Smell test: Kind of cocoa-like, but weird, maybe because of the combination of cocoa and sesame.

From the package: “the natural antioxidant power of cocoa” ... “At Eat.Think.Smile, we think eating should be one of life's great natural pleasures. So we set out to create a new kind of bona fide snacking euphoria that makes you feel good from head to toe.”

This snack was contributed to Taquitos.net by the manufacturer. Review published May 2012.