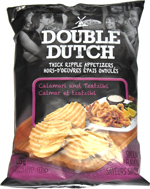 Taste test: These potato chips were very thick and had wide, shallow ripples, with a light yellow color overall, many bits of green seasoning and some areas of darkish skin around the edges.

The calamari flavor was a tough sell with some of our snackers, as we had quite a few who wouldn't try these at all, or only did after considerable convincing to at least try one. Most of those who did try some were glad that they did — this was quite an unusual flavor, but many people ended up liking the taste. The chips were quite thick and had a good crispness and fairly soft crunch. The potato was heavily seasoned, as the flavor was very tangy without being particularly fishy. They captured perhaps a bit of the calamari taste along with a lot of the seasoning and sauce. It was reminiscent of calamari dipped in tzatziki sauce. We shared the chips with lots of snackers, and their opinions were all over the map. Overall, most enjoyed the taste, but there were some detractors. Among professed fans of calamari, some loved these to death, a few hated them and more fell somewhere in between. We wish more chip companies would be bold enough to take a risk like this!

Smell test: Tangy, it does smell a bit like calamari with some spices.

From the package: “Ultimate fusion of flavour and crunch” ... “By fusing together thick cut maximum crunch ripple chips with the savoury flavor of Calamari and Tzatziki we created the ultimate appie snack for your next snack attack!”

This snack was contributed to Taquitos.net by the manufacturer. Review published May 2014.