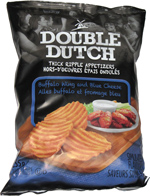 Taste test: These potato chips had wide ripples and a fairly bright orange color on their surfaces, with some bits of darker orange seasoning as well.

We crunched in to find that they were cut fairly thick and a had a nice crisp crunch. They tasted good, but we were expecting them to taste like Buffalo wings or blue cheese — and preferably both — but there wasn't really a spot-on match for either one. The taste was more like a spicy ranch, just mildly hot. It was pretty good taste, but lots of chips have succeeded at getting the Buffalo wings flavor right, so if that's really what you want, this probably won't quite fit the need.

From the package: “Ultimate fusion of flavour and crunch” ... “By fusing together thick cut maximum crunch ripple chips with the savoury flavor of Buffalo Wing and Blue Cheese we created the ultimate appie snack for your next snack attack!”