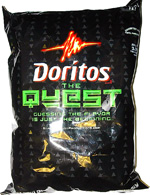 Taste test: This was another "guess the mystery flavor" contest that Frito-Lay held in 2008, a follow-up to 2007's Doritos X-13D, and it's just one of the 110 kinds of Doritos that we've reviewed.

There were no words on the bag giving any clues to the flavor, but perhaps the color of the letters might give you a clue. The chips had a sweet flavor, and our tasters couldn't figure out whether it was more lemon- or lime-flavored. Some guesses included key lime pie, margarita flavors, etc.

In the end, we decided it was Mountain Dew flavored, which made sense if you went to the Doritos Interweb site and played the game (which is no longer there). They were offering a chance to win $100,000 if you could solve a series of puzzles. The first puzzle's answer was Mountain Dew.

Smell test: They smell more like Fritos than Doritos.

From the package: “Solve the Puzzles. Take Control. The challenges are many ... The victors are few ... Guessing the flavor is only the beginning ...”

This snack was discovered by Keith and Melissa at Wal-Mart. Review published June 2008.