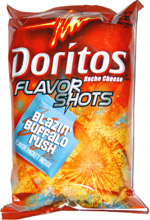 Taste test: This creation from the Snack Strong Productions division at Doritos had the same chips as Nacho Cheese Doritos but included a Blazin' Buffalo Rush flavor packet to let snackers spice things up.

My first reaction was that I was against this idea, because it forces me to do extra work to enjoy my snacks fully — why couldn't Doritos just apply the extra flavor in the first place (as indeed, they previously did with Blazin' Buffalo & Ranch flavor). First, I ate some plain chips, confirming that they were indeed just regular Nacho Cheese. Then I poured the chips onto a plate and opened the flavor packet. I tried to shake carefully so just enough flavor powder got onto a Dorito. I wasn't very good at this, as it was not easy to make a light coating. What I ended up doing was putting on a fairly heavy coating and then shaking off some of the excess. The taste was quite good, as It was a straight-up Buffalo sauce flavor (no ranch added) with a good kick of heat. But the add-your-own-flavor gimmick really didn't impress me. Not only did it add work, it was also messy and wasn't something that I could do better than the factory could. (Kettle Chips had a better take on this idea by including multiple flavor powders to mix together.)

Smell test: Regular Doritos smell when I opened the bag (but not the flavor packet).

This snack was discovered by Jeremy at Tedeschi. Review published July 2009.