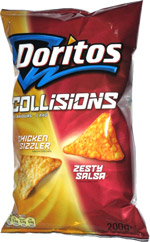 Taste test: This bag contained two different flavors of Doritos, with a slight color difference between the two kinds. The Chicken Sizzler-flavored ones had kind of a yellowish color, and the Zesty Salsa ones were more of a typical Doritos color, with a mix of yellow and orange. Still, I wish they had tried harder to make a stronger contrast of colors in this combination.

I bit into one of the Chicken Sizzler ones first and was surprised to find that it really did taste like chicken, though not particularly grilled or spicy chicken (which I took the word "Sizzler" to be implying). The aftertaste was a bit more like grilled chicken. The salsa ones did taste somewhat like salsa, but hardly a "zesty" salsa. Indeed, both flavors were kind of weak, with a lower level of flavoring than I've come to expect from Doritos, despite being described as "bold" on the back of the bag. I tried stacking one of each kind and eating them simultaneously to see what it would taste like. This caused a problem, because I couldn't fit two whole chips into my mouth at once. When I gave up and just bit into the part that fit before pushing the rest of the chips in, it did create a new taste all its own, with a mix of chicken and somewhat zesty tomato.

Still, I think Doritos can do much better than this.

Smell test: Very nice. It did smell sort of like a spicy chicken fajita, with a lots of spicy tomato mixed in there as well.

From the package: “With 2 bold flavours in 1 bag, you control the ultimate Doritos flavour combination. What collisions combo will you unleash?”