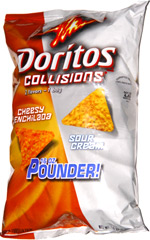 Taste test: This bag contained two entirely different flavors of Doritos, intermixed. Despite Frito-Lay's valiant effort to brand the bag as "Collisions" and explain the two flavors, most of our tasters either couldn't grasp the concept or ignored the details on bag and just crunched in — in both cases blissfully unaware of the intent of the flavor designers.

The Cheesy Enchilada ones looked like regular Nacho Cheese Doritos or were a bit redder, and they had a spicy and fairly hot taste that was maybe remotely like some of the spices in enchilada sauce.

The Sour Cream ones were paler, with just a tiny bit of orange on the otherwise yellow surface, and they tasted sort of like Cool Ranch Doritos (except without much ranch, but there were some other spices mixed in with the sour cream). Some of the Sour Cream ones toward the bottom of the bag had a lot of green stuff on them too.

It turned out that the whole was much more than the sum of the parts, as the taste turned out to be quite good when people took one of each kind and popped them into their mouths together. It did taste a bit like a cheesy enchilada, with a nice mix of hot and cool.

Smell test: Nice mix of tomato ad spices, kind of like an enchilada.

From the package: “16 oz Pounder!” ... “With 2 bold flavors in 1 bag, you control the ultimate Doritos® brand flavor combination.”

This snack was discovered by Jeremy at Wal-Mart. Review published September 2009.