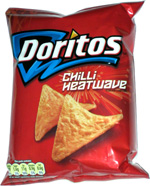 Taste test: This British version of Doritos had the same shape, texture and color as the normal Nacho Cheese Doritos, and the bag resembled the old American Nacho Cheesier flavor before the bag was redesigned when the flavor got renamed back to Nacho Cheese.

Based on the Chilli Heatwave name, I was expecting a hot chili pepper taste, or even an extremely hot pepper taste. But when I crunched in, I was surprised to find that they had a sweet and hot pepper taste. I noticed the sweetness first, but it did come along with a bit of heat, but really only a bit. It was very tasty, but it just wasn't very hot. There was a slightly hot aftertaste, but it was slight enough that even someone who normally can't stand the heat could probably stand this one.

Smell test: Kind of like the regular Doritos smell, but with some sweet pepper added.

From the package: “Doritos taste so amazing because they are made the traditional Mexican way. The best corn is ground into a soft dough. It is then shaped, lightly toasted and quickly fried before being seasoned for that Chilli Heatwave flavour!”