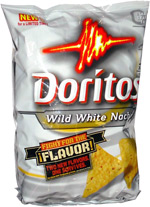 Taste test: This snack helps prove my theory that all Doritos pretty much taste the same.

New flavor? Pshaw. These "wild white nacho" flavored chips tasted exactly like their regular Nacho Cheese variety, albeit with less orange powder. It might be a "lighter" version of their nacho cheese flavor, but it's certainly not that much different. The sad part is that this variety will probably win the "Fight for the Flavor" contest against Smokin' Cheddar BBQ, because people don't know a good flavor when they see (or taste) one.

From the package: “Doritos has two new rival flavors and only one can survive. Will it be the mouth rattling rush of Wild White Nacho or the taste bud torching punch of Smokin' Cheddar BBQ? You choose which flavor will escape the battle to crunch another day.”

This snack was discovered by Keith at Brooks Pharmacy, Ashland, Mass.. Review published .