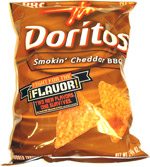 Taste test: I'm a big critic of Frito-Lay for making all of their Doritos flavors taste nearly the same, with just different combinations of ingredients.

That said, this new flavor tasted different, with just enough of the familiar taste to know that you're still eating a Dorito. The chips were still yellow with red-orange seasoning (like the Nacho Cheese flavor), but this flavor had a really good barbecue taste — it reminded me of the smoky barbecue potato chip from Herr's. This is going head-to-head with the Doritos Wild White Nacho flavor in the "Fight for the Flavor" and I wouldn't be disappointed if this chip stayed around for a while, because the taste is good enough to last beyond the limited-time-only stage.

Smell test: Smells a little like taco powder for some odd reason.

From the package: “Doritos has two new rival flavors and only one can survive. Will it be the mouth rattling rush of Wild White Nacho or the Taste Bud Torching punch of Smokin' Cheddar BBQ? You choose which flavor will escape the battle to crunch another day.”