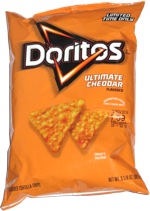 Taste test: This new Doritos flavor jumped out as an oddity, because we've seen (and indeed eaten) it before. The story begins with the Blaze flavor that appeared in early 2018. This hot flavor was followed late in the same year by a Collisions version that combined Blaze with Ultimate Cheddar. That's where it got weird — at the time, there was no such flavor as Ultimate Cheddar, at least as a stand-alone flavor. It's hard to judge individual flavors in bags of Collisions, because some of the flavor rubs off on the other chips. But now — for a "Limited Time Only" — they're selling the Ultimate Cheddar in its own bag. Beyond the words Ultimate Cheddar, there was no marketing copy to explain what it meant.

Smell test: Nice tangy cheese smell. Not all that different from Nacho Cheese.

From the package: “Limited Time Only”

This snack was discovered by Jeremy at 7-Eleven. Review published August 2019.