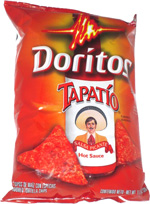 Taste test: This new take on Doritos (released along with Tapatio versions of Fritos and Ruffles) had a slightly darker shade of orange than the ordinary Nacho Cheese Doritos but otherwise looked fairly similar. On close examination, there were some tiny dark specks of seasoning unevenly distributed over the surfaces, which seemed to account for most of the difference in color.

I crunched in to find the usual Doritos texture with an intense, tasty and fairly hot flavoring. There was a good balance between the Tapatío hot sauce and various kinds of cheese, so it was a nice combination and didn't overly rely on the hot sauce. The heat wasn't nearly as hot as Doritos Flamas but it still still left behind a lingering hot aftertaste.

Smell test: Kind of like regular Doritos except way more intense. On second whiff, I could smell some strong taco powder.