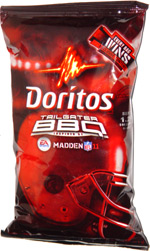 Taste test: These chips (a pregame partner with the Stadium Nacho flavor in this Madden promotion) had the same color as the Nacho Cheese Doritos, and the Doritos folks were generous enough to pack a lot of chips into this smallish bag.

They had a pretty good mild barbecue taste, definitely a different flavor than any other Doritos we've tried, with a bit of smokiness and some sweetness, but no heat. The flavor wasn't something that I'd put anywhere near the top of the barbecue tastes when compared to some of the great barbecue potato chips we've tried, but I still enjoyed eating these.

Smell test: On first whiff, seemed like normal Doritos, but after that I did detect some barbecue seasoning.

This snack was discovered by Jeremy at Dollar General. Review published August 2010.