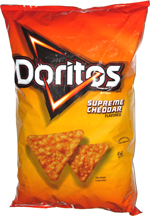 Taste test: We rarely buy Doritos at Costco, for two reasons. First, as with many product lines at Costco, the selection is limited — usually they have just Nacho Cheese. Been there, done that. Second, Costco only sells Doritos in monstrously ginormous bags. This one weighed 30 ounces and was almost 18 inches tall. Huge! We like Doritos just fine, but that's just way too many Doritos.

This was the second time we've made an exception to the Costco Doritos rule. The previous exception was for the Wasabi-flavored ones, which seemed to be a Costco exclusive. Possibly the same deal here: We hadn't seen these anywhere else, so we bought the 30-oz. bag.

Anyway, Supreme Cheddar. Why Supreme? Do they eat them at the Supreme Court? Is it the favorite flavor of Diana Ross & the Supremes?

We opened the bag to find that the chips looked pretty much the same as Nacho Cheese, with wiggly triangular shapes and a mix of orange and yellow on the surfaces. We crunched in to find a fairly ordinary Doritos cheese flavor. There was noticeably less cheese than the Nacho Cheese ones have, but this wasn't a problem, as Nacho Cheese has way more than enough cheese, so there was still plenty of cheese and spices to taste quite good. The balance of cheese and spices to toasted corn was just skewed a bit closer to the toasted corn end of the spectrum. The chips had the same excellent texture that we've come to expect from Doritos. But in the end, the question was, what's the point? Why should these reign Supreme? We checked the ingredients to find that there were two kinds of cheese — Romano and Cheddar — in that order. So more Romano than Cheddar. Adding Romano makes Cheddar more Supreme? We don't know. They just didn't seem different enough from Nacho Cheese to warrant their own flavor, let alone be declared Supreme in their less-cheesy state.

Smell test: Nice mix of cheddar and spices, with maybe some sour cream too?

From the package: “Snack boldly”

This snack was discovered by Jeremy at Costco. Review published June 2014.