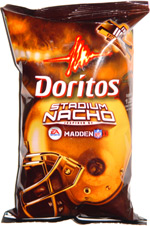 Taste test: This version of Doritos looked a lot like the Cool Ranch flavor in terms of color, as there was definitely less orange than we've come to expect from the Nacho Cheese flavor. But the Stadium Nacho name immediately raised the question of how these would be different from the regular Nacho Cheese — does cheese taste different just because you eat it at a stadium?

When we crunched in, we were reminded that the answer is obviously yes. They tasted exactly like that mild jalapeno cheese sauce that generally comes with nachos at the game, with a bit of heat, but not a ton. That's not necessarily the best of all nacho experiences to aspire to, but it is what they tasted like. Thankfully, having that same taste in Dorito form avoided the messiness of the on-tap cheese sauce, as well as the whole congealing cheese issue.