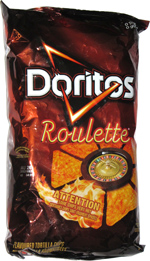 Taste test: This "Roulette" version of Doritos from Canada added a game of chance to the act of eating the popular brand of tortilla chips. Each chip was either a regular Nacho Cheese one or a special hot and spicy flavor.

Having two flavors in the same bag is nothing new for Doritos. That was the point of the Collisions editions, which combined hot wings & blue cheese, taco & ranch, pizza & ranch, chicken & salsa or enchilada & sour cream. The difference here was that those other kinds tried to offer contrasting colors for the two kinds (with varying degrees of success), while Roulette intentionally made two very different flavors look very much the same.

I opened the bag to find a range of color and texture that seemed to match Nacho Cheese. I could not see anything obvious that might tip off which chips were which. So I just grabbed one and crunched in, and that chip sure seemed to be a regular Nacho Cheese one. A couple of chips later, I finally got a hot one. It was a bit deceptive — there was barely any heat on the first bite, so I wasn't sure initially that it even was a hot one. The heat grew soon after and got fairly hot in the aftertaste. We're not talking 3rd Degree Burn hot, but still a very strong kick.

Since the bag promised "a hot chip in every handful" I was expecting a relatively low proportion of hot chips, but after eating lots of them, I was pretty sure that the bag was actually a 50/50 mix of Nacho Cheese and hot ones. That's a guess — for testing purposes, I had to cleanse the palate in between chips, but not always, and without doing so, it was hard to tell where aftertaste of the hot ones ended and next chip began.

This was a great idea. A big part of how we experience taste is based on expectations, so Roulette throws your expectations for a loop. This could be a fun one to eat if you're willing to spin the wheel with heat at stake.

Smell test: Pretty much the same as Nacho Cheese Doritos. Maybe a hint of hot peppers.

This snack was discovered by Dyson in Canada. Review published July 2014.