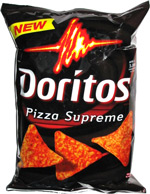 Taste test: This variety of Doritos didn't look a whole lot different from the ordinary Nacho Cheese version, so the big issue for our tasters was definitely going to be whether the chips actually tasted like pizza.

The chips certainly tasted different than the Nacho Cheese ones, but people were quite mixed on the pizza question. Some said they recognized the "supreme" pizza flavor with a whole bunch of toppings, but the mix of spices was so varied that others didn't taste the pizza at all. Verdicts were also mixed, as nobody thought they were awful, but most weren't terribly impressed, and a few people really liked them.

Smell test: Kind of like the spices from a pizza, but also a lot of the regular Doritos smell.

This snack was discovered by Jeremy at Market Basket. Review published February 2011.