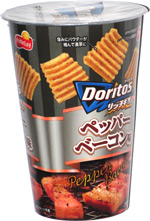 Taste test: This Japanese edition of Doritos broke just about all of the rules of Doritos, as these chips came in a can rather than a bag; were squares and not triangles; were rippled; and seemed to be made from whatever substance it is that they use to make Fritos. 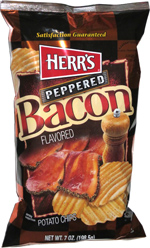 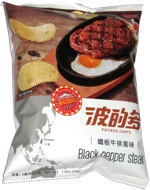 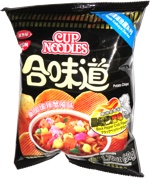 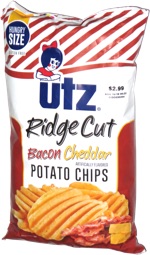 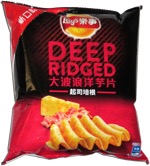 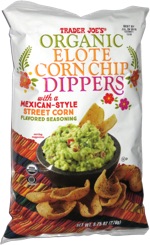 Also of note, it was the first bacon flavor among the 90 varieties of Doritos we've reviewed. The chips were mustard-yellow colored, with a thick cut and sharp-angled ripples, with many small specks of flavor powder on the surfaces. They had sort of the feel of Fritos, except with a much more solid crunch, thanks to the thick cut and ripples. The flavoring was quite tasty, but it's hard to describe, as it was only remotely bacony at first, with some good black pepper kicking in during the aftertaste, but our tasters liked these a lot.

Smell test: Not bacony in the usual sense, but bacon in its own way, thanks to the pepper. Really nice.

This snack was discovered by Jeremy in Tokyo. Review published .