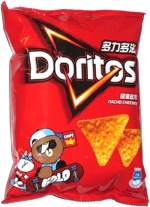 Taste test: A review of this bag of Doritos from Taiwan requires some discussion of the history of the flavor.

First, Doritos created Nacho Cheese, and it was good. Then, at some point in the 1990s, someone decided that Doritos needed more cheese, and the increased level of cheese was sufficiently important to change the name to Nacho Cheesier! Then, in 2006, Doritos redesigned all of their bags, incorporating a new logo, and in the process, the name was changed back to Nacho Cheese. Then, in 2013, they updated the Doritos logo again, while retaining the Nacho Cheese name.

Now they're selling Nacho Cheese Doritos in Taiwan using the 2013 logo but calling the flavor Nacho Cheesier (but without the exclamation point).

When I opened the bag, the chips didn't appear to be as loaded with cheese powder as the current American Nacho Cheese version, though the powder wasn't distributed evenly. I crunched in to find that they were cheesy, but notably less so than the American ones. That sort of contradicted the "Nacho Cheesier" name. They were still good chips, a nice level of cheese and a good corn taste.

The other major revelation with this bag was in the inclusion of two mascots on the bottom-left of the front of the bag. Doritos don't normally have a mascot, but this one had a bear, holding a skateboard with the word "BOLD" on the bottom, wearing a backward baseball cap and holding a bag of "CHIPS" (other than that word, it did kind of resemble a bag of Doritos) in the left hand. There was also a much smaller rabbit, riding a skateboard, wearing a shirt that said "BOLD."

This snack was discovered by Jeremy at Super 88, Boston. Review published August 2018.