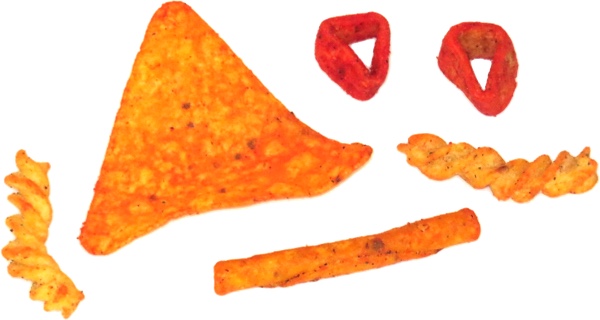 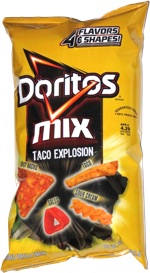 Taste test: Frito-Lay has previously sold mixes that included Doritos, but they were under the Munchies brand, so this was the first Doritos-branded mix that we're aware of. But the fact that it promised a "Taco Explosion" was what really got me excited about it.

The bag combined four different corn-based snacks, with just one of the four being something we've eaten separately on its own — that being Spicy Nacho Doritos, in the familiar orange color and triangular shape. Next came taco-flavored Doritos Dinamita (rolled tortilla chips that we've eaten in Chile Limón, Fiery Habanero, Mojo Criollo and Nacho Picoso, but not in the Taco flavor). Then, some sour cream-flavored Twists (similar to Fritos Flavor Twists, but in a new flavor). Finally, a brand-new shape: small, hollow, bright red, salsa-flavored triangular things, referred to in the ingredients as Open Triangle Salsa Flavored Tortilla Snacks.

When I opened the bag, all that I saw were huge Doritos at the top. When I poured a whole bunch onto a plate, it still was 90% those. I really had to shake things up and dig down into the bag to get a significant number of any of the others.

How did they taste? Let's start with that new shape, the triangular salsa things. They had a feel and crunch much like Fritos, but despite lots of red coloring, the salsa flavor was very mild, with no heat to speak of. The mildness continued for the Taco Rollitos and Sour Cream Twists — nice textures in both cases, and a good taste, but just very mild amounts of Taco and Sour Cream. The only element with a reasonably strong flavor was the Spicy Nacho Doritos. When I ate a bunch of things together, that Spicy Nacho taste easily dominated, so there wasn't much contrast from taco, sour cream or salsa flavor. A good mix still, but if the lesser three elements had delivered on their potential flavor, this might fufilled the Taco Explosion promise.