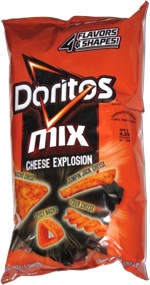 Taste test: This flavor of the Doritos Mix offered the same four shapes as the Taco Explosion version, but with less variety of color, as all of them were very close to the standard Doritos orange.

The dominant chip by volume in the mix was the very standard Nacho Cheese Doritos — or as they're known formally in the ingredients, "Doritos® brand Nacho Cheese Flavored Tortilla Chips." Next up, the tubes of Dinamita, but not in a flavor we've tasted before in that shape, with a technical name of "Doritos® brand Dinamitas Jumpin' Jack™ Flavored Rolled Tortilla Chips." (We have had Jumpin' Jack in the standard Doritos triangles.) Then some twisty thingies with not one cheese, nor two, nor even three, but a whopping four cheese — also known as "Doritos® brand Twists Four Cheese." The only color variety came from the last one, "Doritos® brand Open Triangle Spicy Nacho Tortilla Snacks," but unlike the very red Salsa-flavored ones in this shape from the Taco bag, these were just a slightly darker shade of orange.

When reviewing the Taco version, my main complaint was that the flavors were too subtle. There was a similar problem here, though to a lesser degree. When Doritos sold a Four Cheese version, I really couldn't tell the difference between them and Nacho Cheese, and I'd say the same thing about these Twists. The different shape gave them a different feel and more of a toasted corn taste, but the cheese itself wasn't all that different. The Jumpin' Jack Dinamita tubes had a subtle flavor, with a bit of a kick to it, but just not a lot. The Spicy Nacho triangles did have some of the Spicy Nacho hot kick, along with a Fritos feel, but they were so small that it hardly affected the flavor of the mix.

All in all, there were some nice tastes individually and together, buy the only real "cheese explosion" was coming from the regular Nacho Cheese Doritos, when it should have been arriving from four different directions.

Smell test: Seemed like more toasted corn and less cheese than the standard bag of Doritos (but still plenty of cheese).