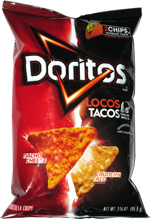 Taste test: This new Doritos flavor and its companion Cool Ranch version have gotten more buzz than any Doritos flavor in recent memory, much of it mocking how circularly derivative it is: A Doritos flavor based on a Taco Bell item based on a Doritos flavor. But really, it was even more derivative than that. Half of the chips in this bag were just the regular Nacho Cheese flavor, which is the most popular, most readily available of all Doritos flavors, so it seems strange to make such a big deal out of it. Two flavors in one bag isn't even a new thing for Doritos, as they were selling "Collisions" flavors that do just that for several years until recently. In fact, one of those Collisions had taco in it: Zesty Taco Chipotle Ranch. Although half of the chips in this bag featured a new "Crunchy Taco" seasoning, recent years have seen a virtual parade of other taco flavors: Late Night Tacos at Midnight, Original Taco, (Un-original?) Taco, Taco (in retro bag) and Rollitos Zesty Taco. They even previously sold Taco Bell-flavored Doritos way back around 1994 (which was unfortunately before we started reviewing Doritos flavors).

One side note: Even with all of their experience making all of those different taco-flavored chips, the Doritos folks misspelled the word "tacos" on the back of the bag. Oops!

As for the chips in the bag, it wasn't simple to tell the two kinds apart visually. The Nacho Cheese chips generally has some orange glow, but the Crunchy Taco ones were all over the map, with some of them lighter in color then the Nacho Cheese ones (like the one pictured on the bag) while other ones were so loaded up with darkish taco seasoning that they were darker than the Nacho Cheese ones. The level of spice on the Crunchy Taco ones varied along with the amount of seasoning visible; some light ones were almost like plain tortilla chips, while darker ones were quite zesty. The taste of eating Nacho Cheese and Crunchy Taco together was pretty good, as the mix of taco powder and cheese worked well enough, but there was really nothing special here. Sure, they probably tasted more like the Doritos Locos Tacos than any of the other taco flavors did, but it still didn't closely match the taste of a Taco Bell taco. So we'll enjoy these for a while as we await the next taco flavor from Doritos. 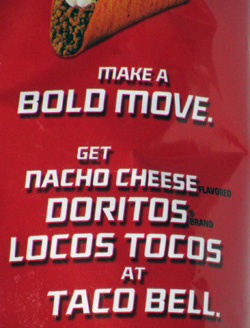 This snack was discovered by Jeremy at CVS Health. Review published April 2013.