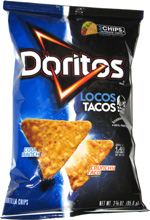 Taste test: This Taco Bell-themed flavor of Doritos (released along with a Nacho Cheese version) purported to split the bag between Cool Ranch chips and the a new "Crunchy Taco" flavor.

This combination was supposed to simulate the taste of Taco Bell's Cool Ranch Doritos Locos Tacos. The picture on the bag showed slightly different colors for the two kinds. However, the reality inside the bag was that there were some chips with lots of dark seasoning (the Crunchy Taco ones), some with a lighter helping of red and green seasoning (the Cool Ranch ones) and lots of others that didn't have much seasoning at all. This wide disparity in flavors and flavor levels made eating these into something of a Doritos roulette. Even when I took a chip that looked clearly like a Cool Ranch and ate it together with a Crunchy Taco one, which would seem to be the whole point, I just wasn't that impressed. With the actual Locos Tacos at Taco Bell, the Cool Ranch shell added something nice to the mix of beef, taco powder, cheese, tomatoes, lettuce and sour cream. But in these corresponding Doritos' attempt to duplicate that taste, the Crunchy Taco ones really just tasted like taco powder, so the Cool Ranch couldn't serve its purpose nearly as well. There were some chips that I think were initially born as Cool Ranch but had some minor taco powder cross-contamination, and those were actually the best ones.

This snack was discovered by Jeremy at CVS Health. Review published April 2013.