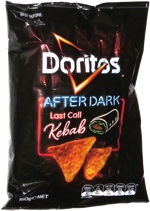 Taste test: These Doritos from Australia closely resembled the American Tacos at Midnight Doritos in bag design, but they promised a somewhat different flavor in kebab.

They delivered an even more different flavor, as the actual chicken taste in the taco ones was absent, as was any other real hint of meat. The taste was more the creamy dressing and spices that would typically come in a rolled-up kebab sandwich (as pictured in neon on the bag) and it was pretty tasty, just not in the "It's after dark, and I'm craving meat!" kind of way. Good, though.

Smell test: Nice mix of creamy and some tangy seasonings.

From the package: “The fun starts when the lights go out … Kick start your night fuel your fun with Doritos® After Dark” ... “Intense flavour inspired by your favourite late-night snacks! Full on crunch!”

This snack was discovered by David Heiniluoma in Sydney, Australia. Review published December 2017.