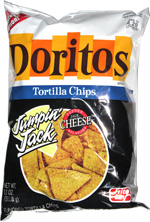 Taste test: The chips in this old-style bag from Doritos looked a lot like the Cool Ranch ones, with a light yellow color and some seasoning on the surfaces, though a close look revealed many tiny bits of black and red/orange seasoning too.

We crunched in to find the usual Doritos texture, with a tasty cheese seasoning that had some pepper kick as well. The taste was a lot like the Black Pepper Jack flavor, as the peppers seemed to include not just hot peppers, but some black pepper. Our tasters couldn't have been more thrilled, as they heaped high praise on these chips while returning to the large bag for second and third handfuls.

From the package: “Pepper Jack Cheese Flavor” ... “Limited Edition” ... “They taste as good as they crunch”

This snack was discovered by Jeremy at Market Basket. Review published January 2013.