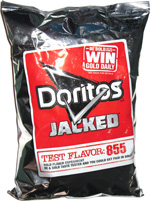 Taste test: The red label on this bag was kind of distracting, because it brought to mind the red Nacho Cheese Doritos bag every time I looked at it. But that was a red herring, because Test Flavor: 855 was supposed to be a mystery whose flavor would remain unknown until eating commenced. (The yellow 404 and blue 2653 bags didn't distract like this, as those colors aren't so closely tied to famous Doritos flavors.)

We opened the bag to find that the chips had an orange/red color, far less bright than the Nacho Cheese ones, but still far brighter than the dreary 2653 ones. As with all of the Jacked flavors, the triangular chips were huge. HUGE. Big enough that one chip could make a small meal. We crunched in to find a good crispness and strong crunch, noticeably less brittle than non-Jacked Doritos. The flavor was cheesy and mildly spicy at first, a bit like the Spicy Nacho flavor, but maybe less spicy. The real heat came in the aftertaste. Not super hot like the first, second or third-degree burn ones, but pretty hot, and a good mix of heat with cheese. Hot enough that we'd consider the "Jacked" label to be appropriate. Very flavorful, very good chips.

Update, 6/30/2014: Frito-Lay announced that this flavor is Spicy Street Taco.

Smell test: Kind of like chili & lime chips, but with a bit of the typical Doritos smell mixed in.

This snack was discovered by Jeremy at Market Basket. Review published April 2014.