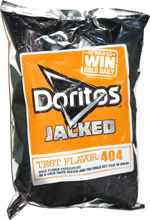 Taste test: This mystery Doritos flavor got a number instead of a descriptive name (as did 855 with a red label and 2653 with a blue one). The choice of the number 404 was a curious one, because it immediately brought to mind the Interweb's "Not Found" error. Flavor Not Found? Snack Not Found? We don't know. What we do know is that most of our snackers found these Doritos to be quite spicy and tasty. The chips had a dull orange color generally, with some areas more of a dull-and-dark orange thanks to lots of darker seasoning powder clumped on. They were also extra-extra large as triangular tortilla chips go. We crunched in to find a strong, solid crunch with a good crispness, plus a sweet, citrusy tropical fruit taste mixed into a chili pepper flavor. The lime in particular became even more noticeable in the aftertaste, as did the heat. A reasonably hot but not scary-hot flavor, quite tasty, a great mix of spices, sweetness and lime.

Update, 6/30/2014: Frito-Lay announced that this flavor is Caribbean Citrus Jerk.

From the package: “Bold flavor experiment” ... “Be a bold taste tester and you could get paid in gold!”