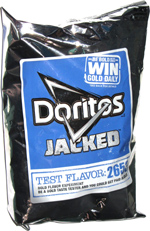 Taste test: This limited-edition Doritos bag hid its true flavor behind a code number, in conjunction with some contest. It was introduced alongside mystery flavors 855 (red bag) and 404 (yellow bag), bringing our Doritos review total to 106 varieties. The chips had the same oversized triangular shapes as the other Jacked flavors (Ranch Dipped Hot Wings, Smoky Chipotle BBQ and Enchilada Supreme), and the surfaces had generally a dull orange color, with some areas very dark orange. The chips had a rough texture, including some curvature and bubbles embedded inside most chips. We crunched in to find a strong, crisp crunch, with a surprisingly mild flavor. The initial taste was somewhat sweet, like maybe a mild cheese with some sweet pepper, but it was certainly not a "Jacked" level of flavoring. After that, we could taste mostly the toasted corn, which again seemed to be less than "Jacked" in flavor intensity. There was just a mild heat in the aftertaste, not much to speak of. Reasonably tasty, but there was nothing extreme here other than the very large size of the chips.

Update, 6/30/2014: Frito-Lay announced that this flavor is Chocolate Chipotle Bacon.

Smell test: Fairly intense, like a mix of taco powder and barbecue sauce.

From the package: “Bold flavor experiment” ... “Be a bold taste tester and you could get paid in gold!”

This snack was discovered by Jeremy at Market Basket. Review published April 2014.