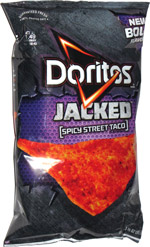 Taste test: This new product from Doritos wasn't really a new flavor, as it was just a new name for a flavor previously sold as Test Flavor: 855. For those of us evaluating the chips, the difference was that with the previous package, we had no idea what to expect, but now we knew that these were supposed to taste like tacos, or more specifically, street tacos (whatever that means).

This was far from the first time that Doritos went down the taco road. Even putting aside the identical flavor with the mysterious name, these's been Taco, Original Taco, Tacos at Midnight, Taco in a retro bag, Taco Bell Nacho Cheese, Taco Bell Cool Ranch, Zesty Taco (in Rollitos shape), Zesty Taco Collisions with Chipotle Ranch and Japanese Taco.

Even more impressive than the long list of past Doritos taco flavors was that this flavor was quite different from all of those. We crunched in to the oversized Jacked chips to find that there was lots of spice, particularly in the aftertaste — enough of it that the overall taste didn't seem much like a taco. It was just a slight hint of taco mixed into the very spicy flavor. We like spicy stuff, but this particularly variety of spice didn't play so well with the taco flavor. Still pretty good if you want something hot, but if you're craving the taste of tacos, you might be better off getting one of those other taco flavors ... or just getting yourself a taco!

From the package: “It came without warning: a new, extreme snack sent to shock your taste buds with mind-blowing flavor and a bigger, bolder, thicker crunch than you've ever experienced before. Doritos®brand Jacked™ tortilla chips have arrived. Can you handle it?” ... “Experience an East-meets-West fusion of flavors! The rush of fierce sriracha sauce, is cooled with the kick of sour cream and blended with savory taco spices for our boldest experience yet!”

This snack was discovered by Jeremy in New Hampshire. Review published October 2014.