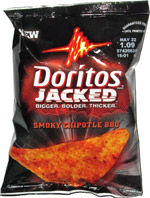 Taste test: This new one from Doritos brought not just the promise of a bold new flavor, but a new recipe for the underlying chip, as they claimed to have "Jacked" things up with a bigger and a thicker version of Doritos.

I grabbed a chip and found that they indeed delivered on the "bigger" part, as these roughly triangular chips looked big — they measured just over three and a half inches on two of the edges, and just over three inches on the third side. I bit in to confirm that the chips were also thicker than regular Doritos, as promised, with a different sort of crunch. Not really a hard crunch, but a slightly more solid one, with less of that nice crispness that Doritos normally have. The chips were in some cases slightly wiggly, but the surface was generally smoother than normal Doritos. The surface had an uneven coating of flavor powder, though the color wasn't all that different than standard Doritos (but there was less yellow). The chips were fairly tasty, with a pretty high level of flavoring, some nice barbecue spices and a moderately hot aftertaste. Not a particular distinctive taste, but still a good one. The boldness wasn't so apparent at first, but eating several chips in a row really helped add to the effect, as the heat and taste kept growing. Did all of this add up to chips that were really jacked, a big step above your usual Doritos? Not super-jacked to get too excited about, but yes, a bit jacked, so it was an admirable attempt.

From the package: “Bigger. Bolder. Thicker.*” ... “It came without warning: a new, extreme snack sent to shock your taste buds with mind-blowing flavor and a bigger, bolder, thicker crunch than you've ever experienced before. Doritos®brand Jacked™ tortilla chips have arrived. Can you handle it?” ... “Bite into the flavor of succulent baby back ribs smothered with sweet hickory BBQ sauce. Then light up your senses with the taste of spicy chipotle peppers for a wicked afterburn.” ... “*Bigger. Bolder. Thicker. Compared to regular Doritos®brand Tortilla Chips”

This snack was discovered by Jeremy at CVS Health. Review published March 2012.