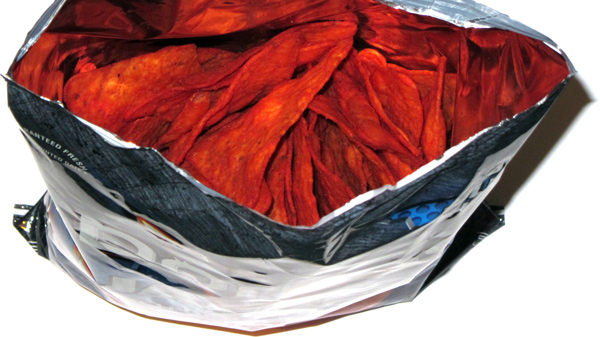 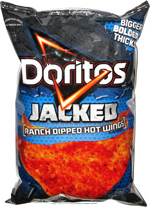 Taste test: It seems this new Doritos flavor was a big enough deal that Frito-Lay graced the bag with an entirely new Doritos logo, never before seen on any other flavors, nor on the Doritos website or Super Bowl ads. It didn't look like the new logo was for the entire "Jacked" sub-brand, as the two other Jacked flavors, Enchilada Supreme and Smoky Chipotle BBQ, were next to this on the shelf, with the old logo. This turned out to be a new logo for the whole Doritos brand.

It's odd that this flavor got the special treatment, because Ranch Dipped Hot Wings sounds a lot like what's already been done. We saw those same words "Hot Wings" in a "Collisions" version that also had blue cheese, with the two flavors each on separate chips. They also had a Blazin' Buffalo & Ranch, which put both flavors on one chip, and Hot Wings vs. Buffalo Wings doesn't seem like a large leap.

The major difference here was that they Jacked the standard Doritos formula to make the the chips thicker and bigger (and supposedly bolder). I opened the bag and was absolutely floored by the brightness of the orange-red chips. It seemed positively radioactive. The foil bag might have been a factor in elevating the apparent brightness, since when I poured some onto a plate, the nuclear effect wasn't quite so strong, but on the plate I was struck by the sheer size of the chips. The isosceles triangles had two sides measuring over 3-1/2 inches, and the other one was just over 3 inches. I crunched in to find that they were thicker and had a harder crunch than non-Jacked Doritos, and they were quite loaded with very good flavor. There was a reasonably strong level of heat, tempered a bit by the ranch. But the ranch was so busy doing its tempering that you could hardly taste it, as the hot sauce dominated the flavor. It was a tasty heat, but not a super-hot one, definitely not as hot as Fiery Habanero but still pretty bold as Doritos flavor go. Tasty, crunchy and quite good!

Smell test: Good tangy ranch smell, but no heat at all.

From the package: “Bigger Bolder Thicker” ... “It came without warning: a new, extreme snack sent to shock your taste buds with mind-blowing flavor and a bigger, bolder, thicker crunch than you've ever experienced before. Doritos®brand Jacked™ tortilla chips have arrived. Can you handle it?” ... “Savor the burn of tangy hot wings smothered in buffalo sauce. Then cool down your taste buds with a second wave of flavor: a blast of creamy ranch.” ... “*Bigger. Bolder. Thicker. Compared to regular Doritos®brand Tortilla Chips"