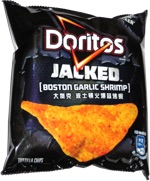 Taste test: These Doritos from Taiwan took their enormous triangular shapes from the American "Jacked" Doritos flavor Ranch Dipped Hot Wings that we first found six years ago. They had a mustardy orange color with lots of dark spots and not much powder on the surfaces.

I crunched in to find a strong crunch and a spicy, garlicy flavor with some strong hints of shrimp, so it could definitely qualify generically as Garlic Shrimp, if not necessarily Boston Garlic Shrimp. There was some heat too, which got especially noticeable in the lingering aftertaste. Pretty good.

This snack was discovered by Jeremy at Super 88, Boston. Review published April 2019.