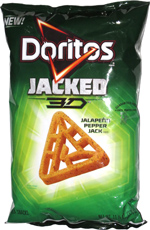 Taste test: For years, Doritos 3D's have been one of those snacks that lots of people wanted to eat, but nobody could find them. Over a decade ago, we reviewed Zesty Ranch, Jalapeño Cheddar and Nacho Cheesier versions from the USA and a Texas Paprika flavor from the UK. Since then, we've had numerous folks reading those reviews and trying to find them, with no success.

This time, the bag said 3D, not 3D's, and the chips were a whole new shape, nothing like the hollow, thin-surfaced, triangular pillow-shaped ones of yore. Despite the addition of "Jacked" to the branding, they were also nothing like the recent line of Jacked Doritos (such as Ranch Dipped Hot Wings, Enchilada Supreme and Spicy Street Taco), which were oversized, extra-thick Doritos.

In this case, each piece was an isosceles triangle, measuring an inch and half on two of the sides and a bit less on the third, with a pattern of lines and openings in the middle. It wasn't hollow at all like the previous 3D's. The thickness of the 3D varied quite a bit from one piece to the next, and even within each piece, as it ranged from 1/8 inch to 1/2 inch. We crunched in to find that the texture and material was a lot more like Fritos than Doritos. In fact, Fritos once made a chip much like this, Fritos Racerz, shaped not like a triangle but like a car, and flavored differently, but otherwise kind of similar. There was enough jalapeño pepper jack flavoring that it didn't taste that much like Fritos, but it did feel like them. The flavor was pretty good, with good strong cheese taste and a moderate heat. But we doubt that the folks who have been desperately looking for 3D Doritos will get any satisfaction from these.

Smell test: Kind of like ranch flavor, with maybe a bit of heat too.

From the package: “Enter the next dimension of crunch with the intense flavor of these bite size triangles. Bold things come in 3D! Dive face first into the crunch of jalapeño and spicy pepper jack cheese.”

This snack was discovered by Jeremy at Market Basket. Review published March 2015.